Have Fun with Dopey Experiment System in Roulette Betting 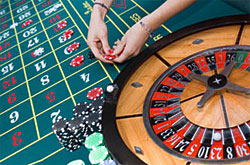 The Dopey Experiment isn't a real system as other roulette betting systems, for example, Labouchere system or Martingale system. It is for fun. Andres Martinez described it in his book entitled "24/7: Living it up and doubling down in the new Las Vegas". This experiment does not promise that you will gain a lot of money, but you will have a good time in the casino, that is for sure.

Andres Martinez was born in Mexico in 1966. He gained a master's degree in Russian history from Yale University and a law degree from Columbia University. His career steps are diversified.

In 1995 Andres Martinez published his first book "24/7: Living it up and doubling down in the new Las Vegas", where the Dopey experiment was described.

Method of the Dopey Experiment

The player should take a roulette bankroll (amount of money, which you are ready to spend) and divide it into 35 even units. Then it is necessary to choose a roulette number. It can be anything you want. For example, your birthdate, lucky number. Mr. Martinez, as we can read in his book, chose the birthday of his wife - 22.

Then you place your bet for consecutive 35 roulette spins. You will have 60% chance to win. If you win, continue playing. You will be glad to play roulette, realizing that you play with the house money and not yours. If you lose 35 consecutive spins, don't worry.

The players can really enjoy the Dopey experiment, playing the roulette game in casinos online.

The Name of the Experiment

The term 'dopey' means stupid, clumsy, and foolish. But while playing, using the Dopey experiment, the gamblers can notice that the experiment is not dopey at all. The game becomes funny and frantic, when they use this experiment.