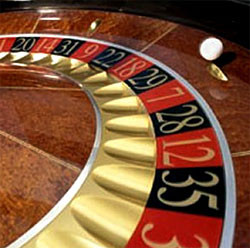 One of the famous betting roulette systems is Labouchere, also called "Cancellation system" and "cross-out" system.

History of the Labouchere System

The Labouchere system of placing bets was born in France. It was created by Monsieur or Madame Labouchere. Unfortunately nobody knows the exact story of creation. But it is well-known that roulette games were very popular in France during 18-19th centuries.

Principles of the Labouchere System

The Labouchere system requires the basic mathematics knowledge. First of all, it is necessary to decide what sum of money the roulette player wants to win. For example, one decided to win just 20$. Then there is a need to write down series of positive numbers which together will be his desired gain. The gambler can write down as much numbers as wants and finally it should be an even sum of numbers. In our case, it could be the next row of numbers: 1, 2, 4, 1, 3, 6, 2, 1. Next step is to take the first and the last number and add them. It will be the sum of the first bet. If the bet won, it is necessary to cross these numbers out of the row. If it lost, the player adds the amount of the lost bet to the end of the line. Then the betting continues as before. When all numbers are crossed out, the desired amount is won.

Benefits of the Labouchere System

The use of this system gives good odds because the players put only even-money bets. The Labouchere system works better while playing the European roulette because the house edge is not as high as in the American roulette.

Risks of the Labouchere System

If the player has big losing streak, it can significantly affect the bankroll. No-one is protected against the roulette house edge.

Reverse Labouchere is a type of Labouchere system created by some players. The players who prefer this variant of placing roulette bets do not cross first and last numbers of the line. They add the next number to the bet which was before.

Let's take already described example. In case of Reverse Labouchere system when the first bet (1+1=2) won, the player adds next number (2) to the winning bet. So, the next bet will be 2+1+1=4.

Benefits of the Reverse Labouchere

The players do not cross the numbers and can play for a rather long time. In case reaching the table limit, they can pass to another table or go home with gained money.

Risks of the Reverse Labouchere

Long losing streak can influence badly the gambler's bankroll and lead to spending the greater amount of money than while using the Labouchere system.