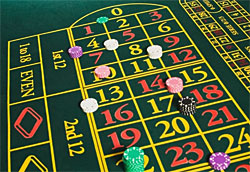 There are as many roulette betting systems as the players. And these systems are as old as the roulette casino game itself. But the truth is that any system can't guarantee that you will always be at the top of the game. With system or without it, winning and losing will continue to exist.

Simple Roulette Tactics for Everyone

There are some simple recommendations for players of the roulette casino game.

Define the budget. This tip means that players are advised to determine their available sums of money for the game and stop the game when they are "done", it means being without the money prepared for the game. The advice to the gamblers is to set goals, achieve them and go home.

Do not divert your attention. This recommendation means not to try to place the roulette bets on all possible variants, despite of the big range of such possibilities. In this case, they will lose 99% of time.

Strengthen the position by keeping the bets to the minimum. "Move slowly, drive safely". It means lower bets provide higher chances not to lose.

In addition to simple tips which are easy to understand for everyone playing roulette, there are enough serious roulette betting systems and strategies. For example, Labouchere, d'Alembert, Martingale, Dopey experiment etc. Any of the systems can be used in your game. But it is well-known that, when one system works for one person, it doesn't mean that it will work in the same way for another one.

One of the systems is Labouchere system or Cancellation system. According to this system it is, first of all, necessary to decide, what sum of money the gambler wants to win. For example, the roulette player decided to win just 20$. Then, it is indispensable to write down series of positive numbers, which together will be the desired gain. The gambler can write down as many numbers as he/she wants and finally it should be an even sum of numbers. In our case, it could be the next row of numbers: 1, 2, 4, 1, 3, 6, 2, 1, and the next step is to take the first and the last number and add them. It will be the sum of the first bet. If the bet won, it is necessary to cross these numbers out of the row. If it lost, the player adds the amount of the lost bet to the end of the line. Then, betting is continuing as before. When all numbers are crossed out, the desired amount is won.

James Bond strategy has the name of a famous Ian Fleming's character. In "Casino Royale" Bond always played the first two dozens (1-12, 13-24) and won great sums of money. The winning probability according to the theory of probability will be 65% in a single-zero roulette and 63% in a double-zero roulette.

Another popular roulette betting system is d'Alembert system. This system differs greatly from the Labouchere system. The players suppose that once they have won the more chances they have to lose the next time. So they remove one chip. And in the opposite case - after losing, the players assume that next time they, probably, will win so they add one more chip to the bet. It is necessary to choose an even money bet (Even, Odd, Red, Black, High, Low) and bet it all the time.

The most popular betting system is Martingale one, which is a progressive system. For example, you start betting from 10$, then bet 20, 40, 80$ and to the maximum. With every successful winning bet the gamblers make the same one next time. But in the case of a loss, they should double the bet.

The Dopey experiment is not a real system as for example d'Alembert system. Using the Dopey experiment system, you need to divide roulette bankroll into 35 units. And then you bet this unit for 35 spins. When the number wins, you continue playing with house money.

In addition to described roulette betting systems, many attempts were made by engineers to develop schemes for overcoming the house edge. It was made through predicting the mechanical movements of the wheel and efforts to build special computers, which will predict where the ball will land. But in reality, the invented special devices can't be used, while playing, because of the high level of supervision in land-based casinos.