History and Evolution of Roulette Game in Europe and in the U.S. 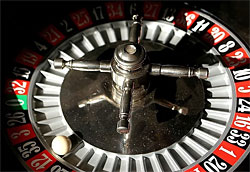 The history of the game goes back to the 17th century. Inventing a perpetual motion machine, a French mathematician Blaise Pascal presented a basic form of roulette wheel in around 1655. In addition, there are facts that the French Dominican monks entertained themselves with the help of a game, similar to contemporary roulette, in the end of 17th century.

European Roots of the Game

All things considered, similar to contemporary roulette casino game activities were had been held hundred years before French roulette became a popular game in Paris. It was at the end of French Revolution, which took place in 1789-1799. Roulette-like games were the games of the Italian origin called Hoca and Biribi, and the English game of E.O. ('Even' and 'Odd'). There were also such English wheel games as Roly-Poly, Reiner and Ace of Hearts, which altogether probably gave the birth to a modern roulette. The Hoca game was spreading within Europe quickly; Cardinal Mazarin, a chief minister of France, built some Hoca casinos in the middle of 17th century to save money for the royal funds.

Francois Blanc and the Evolution of Roulette

Some years later Frenchmen Francois and Louis Blanc presented the single zero style roulette wheel in German. Their aim was to contest other casinos that offered traditional conditions. Some years later German government abolished gaming and the Blancas had to travel to Monte Carlo, the last city in Europe, where gaming wasn't illegal. The single zero roulette had become the leading game of all Monte Carlo casinos. There is a sinister legend, which says that Francois Blanc made a deal with the devil to gain the secrets of roulette.

Roulette in the USA

During the French revolution French immigrants first introduced roulette in the USA. At the end of 18th century, when the capital of the US was New Orleans, they started to play roulette in Louisiana. But American roulette variation obtained some differences: an additional double zero pocket on the wheel and the image of the American Eagle on the layout.

On the turn of 20th century Monte Carlo and Las Vegas became the world famous capitals of casino games. Nowadays casinos of these cities commonly offer American roulette variation, whereas European roulette is popular all over the world.