Roulette Players and Their Superstitions 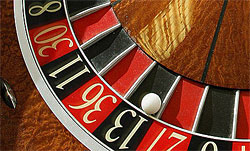 Apart from the superstitions, the players know some roulette myths, which, as they think, can help them to increase or decrease their chances to win.

There are two most popular roulette superstitions, which exist among the players - lucky numbers and trends.

Trends are the most beloved superstitions among the roulette players. Gamblers believe that roulette trend is not accidental, like 6 blacks in a row or 6 numbers in the 1st dozen in a row.

So, roulette superstitions exist and it's up to the players to decide: believe or not to believe.