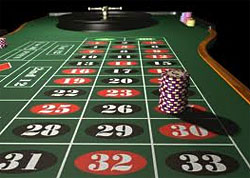 Every game has both winning and losing probabilities; so does roulette. It is widely known that roulette is a casino game, so, casinos are getting certain income of every placed bet. That's why we can call house edge a special profit which casino takes off the player.

Another name for the house edge is casino advantage, which speaks clearly about the essence of this phenomenon. Each variation of roulette casino game has a fixed house edge that depends on the game's specifics.

Demonstration of the House Edge: How It Works

Every rule, peculiarity or obligation is efficient only after showing it in practice. What is more, roulette is a table game and its peculiarities can be completely caught only during the gaming process. To realize the real essence of the house edge you should imagine the following. Firstly, place $1 bet on each number from 1 to 36. Don't forget placing a bet on a single and double zero too. It would help you to guarantee success. Then you will notice your bets returning back to you only for 35 times while spending $38.

How to Cut a House Edge by Yourself?

It is commonly known that European roulette variation has a lower house edge than American type and give players higher chances for winning. But there is one way to decrease the influence of house edge. Some casinos offer their players a special option - a right of using an 'en prison' rule. This rule works only with the straight roulette bets. The matter is that when the ball stops on zero, it doesn't mean the immediate misfortune of your bet. You have a full right to 'imprison' the bet for the next turn of roulette wheel. While your bet is 'imprisoned', you are able to get it back by yourself - but only in the case of hitting in the next wheel rotation. But when your bet is out of luck again, the house takes it all. Another option of an 'imprison rule' is to get back a half of the bet, whereas the other half is lost. Nevertheless, 'en prison' rule helps to reduce the house edge for even money bets in a half. That's why the 'en prison' rule is important in playing roulette.