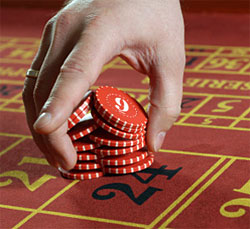 There is a widespread opinion that illegal methods of gambling are used in casino games. And in most cases it is really so. Among the methods of cheating there are such as top hatting and past posting. The roulette history knows a wonderful story of huge winnings, using effective roulette scam. And the most interesting fact is that the gamblers were left without punishment.

In 1970s the quite effective system of using laser was developed by physicist Norman Packard. He told that it could be easily used, as the players just needed to understand the mechanics of action and have necessary tools.

The system of laser cheating was tested in laboratory. The system works as follows. A laser scanner is hidden in the mobile phone. The laser can measure the speed of the wheel and also the speed of the spinning ball. The ball's speed can be already determined after the second point. Special computer system, which is situated in the mobile phone, can calculate the probability and predict the number of the winning slot. It takes a few seconds to know, where to place the bets. And it becomes known, before the wheel makes three revolutions. Laser scam is one of the methods of cheating at roulette and it is not legal.

How to Prevent the Laser Scam Usage?

Norman Packard said that there could be a variant of preventing the using of laser scam. The only necessary action is to spin the wheel more quickly. It can make the ball to spin incalculably.

The 16th of March 2004 is known in the roulette history as a case of great win in the Ritz Casino in London. Three gamblers - a woman from Hungary and two men from Serbia - used laser technology, while playing roulette. It is said, that they used mobile phones with a hidden laser. The gamblers have managed to gain 1.3 million pounds (100 000£ during the first night and 1.2 million pounds during the second).

Three gamblers were arrested but the police decided that their actions were not illegal. The lucky roulette players were released. The players' funds were frozen.

After the great gambling at Ritz Casino, all the casinos reviewed their security systems.

As for nowadays, it is, actually, forbidden to use mobile phones in casinos in order to prevent usage of laser scam methods.