Ashley Revell is a 32 years-old Londoner who became popular all over the world. He added a glorious page to the roulette history. Here is his story. 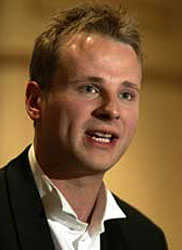 Ashley Revell was an ordinary man who was interested in Roulette and Poker casino games. One day he decided to sell everything he had to go playing roulette in Las Vegas. And he sold all his belongings which made 135 300$. He wanted to tell the friends about that crazy idea. But it spread fast and Sky One Television decided to broadcast Revell's game online in a TV show "Double or Nothing".

In 2004 Ashley went to Las Vegas together with his parents and a TV crew. The game had to be at the Plaza Hotel and Casino.

Before the great game Ashley wanted to exercise for a short period of time. But his first attempts were not lucky and brought him a loss of 1000$.

Then the crucial game started. While the wheel was spinning, Ashley Revell wanted to bet on black but at last he changed the mind and bet on red. He remembered that TV show viewers wanted him to place bet on red. Finally the ball landed on red 7! The lucky gambler managed to double his money and got 270 600$!

After the great game, the Plaza Hotel presented Ashley champagne and a suite. He signed the wheel, which can be now seen by everyone in the lobby of hotel.

The lucky gambler used his winnings to create a poker site "Poker United", which became very successful among casinos online.

Afterwards, in the interview Ashley said that he really didn't know, what forced him to conduct that crazy deed. He is not married and has no children. But his amazing game made Ashley Revell rich and famous. Next to him, we can find the names of such famous roulette bettors as Charles Wells and Joseph Jagger.